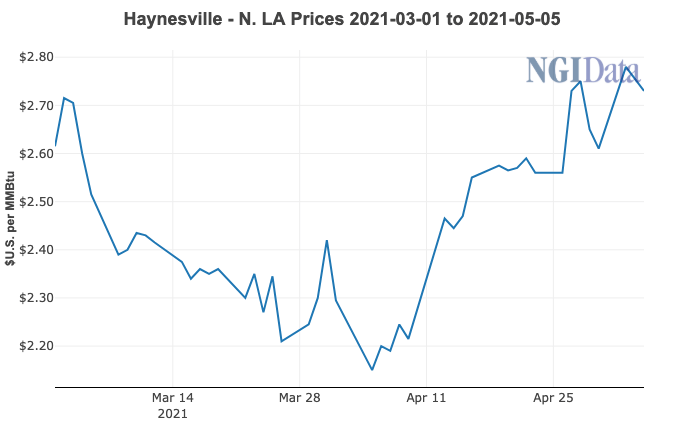 The Frisco, TX-based independent has 323,000 net acres in the Haynesville/Bossier formations across East Texas and North Louisiana, one of the gassiest regions of the country.

The winter storm in Texas in February impacted around 500 MMcf/d of production for “several days,” executives said.

“Our operating plan for this year is expected to provide for modest production growth,” Allison said. The aim is to generate in excess of $200 million in free cash flow.

The producer, which is majority controlled by Dallas Cowboys owner Jerry Jones and family, is looking primarily in 2021 to improve its balance sheet, reduce leverage, and lower its cost of capital, the CEO said.

All-in first quarter capital spending was $169 million, including $6 million for leasing activities. Capital expenditures for the year on the development side are expected to be $510-550 million. Plans are to turn 17 wells (15.3 net) to sales in the Haynesville/Bossier formations through June. It turned in line 9.5 net wells in 1Q2021.

Comstock drilled 19 net operated horizontals in the Haynesville/Bossier in the first quarter at an average lateral length of 7,351 feet.

The company noted that it has partnered with BJ Energy Solutions to deploy its next generation fracturing fleet in the Haynesville that would be fueled by 100% natural gas. The program is set to begin early in 2022.

First quarter net loss was $138 million (minus 60 cents/share), compared with year-ago profit of $29 million (16 cents). The net loss in 1Q2021 included a $239 million pre-tax loss on the early retirement of senior notes and $13 million in unrealized losses on hedging contracts.

Article published by Natural Gas Intelligence on May 6, 2021 – Click to View Source Article